Antonio Vivaldi (1678-1741) was probably the most celebrated and one of the most prolific composer of the Italian Baroque era. 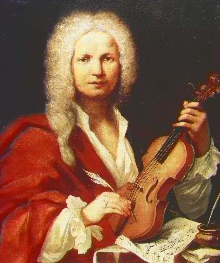 Among his 800-plus known works are more than 500 concerti, a handful of operas, sacred vocal works and, as befits a virtuoso player (he was a violinist), numerous international works. But while many of his pieces have stood the test of time and are frequently played and recorded today, none is as popular as Le quattro staggioni, The Four Seasons.

Don’t regard The Four Seasons as a single work. They are four concertos for violin and orchestra, each depicting a season of the year, and together form part of a set published at the same time called Il cimento dell’armonia e dell-‘inventione, or The Trial of Strength Between Harmony and Invention. While The Four Seasons was published in 1725, they were actually written some time earlier, around 1716-17.

So what is it about The Four Seasons that has made them so universally popular? I suppose the first thing to say about them is they represent one of the first and best examples of programme music: works that have a central theme. And in this case, the theme is simple. We all understand the seasons and we can all try to hear depictions of them in The Four Seasons. And that made The Four Seasons so revolutionary.

One of other remarkable things about The Four Seasons is that each concerto was accompanied by an illustrative sonnet, thought to have been written by Vivaldi himself. This makes them an art form that is distinct from the run-of-the-mill concerto. They are extra-musical works with a narrative element in the form of sonnets and some unusual instructions provided by Vivaldi. For example, in the score of the second movement of Spring, he alludes to “The barking dog”, in the opening movement of Summer he wrote “Languor caused by the heat” and the words “the drunkards have fallen asleep” in the second movement of Autumn.

This programme is a movement-by-movement rundown of The Four Seasons, looking at how the music reflects the words of the sonnets.

The recording I am using throughout this programme is by the Orpheus Chamber Orchestra with the American-Israeli violinist Gil Shaham.

We’ll start where The Four Seasons starts – with the first movement of La Primavera, Spring. First, though, let’s read that part of the Spring sonnet that accompanies this movement.

Springtime is upon us.
The birds celebrate her return with festive song, and murmuring streams are softly caressed by the breezes.
Thunderstorms, those heralds of Spring, roar, casting their dark mantle over heaven,
Then they die away to silence, and the birds take up their charming songs once more.

You can hear that story in this movement.

Now, here’s that part of the sonnet relating to the second movement.

On the flower-strewn meadow, with leafy branches rustling overhead, the goat-herd sleeps, his faithful dog beside him.

I can hear all that in the second movement. Can you? Listen…

Now, here is the sonnet on the next movement.

Led by the festive sound of rustic bagpipes, nymphs and shepherds lightly dance beneath the brilliant canopy of spring.

Listen out for the bagpipes – a drone in the lower strings – and then some beautiful violin moments that bring the images of shepherds lightly dancing to life.

The second concerto in The Four Seasons is L’estate, Summer. Let’s read that part of the Summer sonnet that relates to the opening movement.

Under a hard season, fired up by the sun
Languishes man, languishes the flock and burns the pine
We hear the cuckoo’s voice; then sweet songs of the turtledove and finch are heard.
Soft breezes stir the air, but threatening
The North Wind sweeps them suddenly aside.
The shepherd trembles, fearing violent storms and his fate.

As we listen to the first movement of Summer, hear how Vivaldi depicts a stiffingly hot Italian summer. You can almost hear the heat haze at the beginning. Now, hear the birds – they’re not obvious but they’re there – before Vivaldi introduces a soft wind that builds up into something more stormy. The shepherd is wary, as you might hear.

So, here is the first movement of Summer.

The second movement of Summer is accompanied by these words…

Listen for all of these things: the insects played by violins and the sudden depiction of lightning and thunder. It really surprises you, as lightning usually does.

Here’s what the sonnet says about the third movement …

Alas, his fears were justified
The Heavens thunder and roar and with hail
Cut the head off the wheat and damages the grain.

There’s nothing welcoming about Vivaldi’s summer. It’s hot and unpleasant as you can hear, and there’s something distinctly unsettling about the ending of the movement.

We now come to the next season, Autunno, Autumn. The first movement of this concerto is accompanied by the following words…

Celebrates the peasant, with songs and dances,
The pleasure of a bountiful harvest
And fired up by Bacchus’ liquor
Many end their revelry in sleep.

So we start with a cheery celebration with light music followed by a very strident violin section that depicts, well, people who have enjoyed a few drinks. And then it ends with the whole party falling fast asleep. It’s been a good time. The harvest is in, everyone’s been celebrating and everyone’s knackered.

The second movement carries on the story.

Everyone is made to forget their cares and to sing and dance
By the air which is tempered with pleasure
And (by) the season that invites to many, many
Out of their sweetest slumber to fine enjoyment.

The movement starts with the sound of folk fast asleep, perhaps enjoying a pleasant dream (the harpsichord) while the passing hours soothe the effects of the alcohol consumed the night before. I think it’s possible to picture this particular painting, as we’ve all been there, haven’t we?

In the third movement of Autumn, things begin to liven up. Here are the words that accompany the allegro…

The hunters emerge at the new dawn
And with horns and dogs and guns depart upon their hunting
The beast flees and they follow its trail; Terrified and tired of the great noise
Of guns and dogs, the beast, wounded, threatens
Languidly to flee, but harried, dies.

The movement begins with the very clear sound of hunters setting out. Suddenly, their prey dashes off but it is wounded and eventually succumbs. Hear the low notes as it dies.

The musical depiction of L’inverno, Winter, actually makes me feel cold, and so too does the sonnet. Here are the words for the opening movement…

To tremble from cold in the ice snow,
In the harsh breath of a horrid wind;
To run, stamping one’s feet every moment,
Our teeth chattering in the extreme cold.

The movement starts off with a vivid depiction of a something chilly. We can hear the harpsichord portraying the bitter cold. Then comes the violin soloist, representing an unwelcome cold wind. Now we hear someone running, quickly stamping feet in a failing attempt to beat off the cold. You can hear teeth chattering in the cold, with the violin bow bouncing off the strings.

In the largo, the second movement of Winter, Vivaldi portrays the following…

Before the fire to pass peaceful, Contented days while the rain outside pours down.

We have a lovely restful section. I think the cello plays the part of the fire warming the room while outside the rain batters down.

We tread the icy path slowly and cautiously,
For fear of tripping and falling.
Then turn abruptly, slip, crash on the ground and,
Rising, hasten on across the ice lest it cracks up.
We feel the chill north winds course through the home
Despite the locked and bolted doors…
This is winter, which nonetheless
Brings its own delights.

In this movement you can very definitely hear someone treading cautiously across the ice. Then we can hear someone falling before we come to the winter winds battling furiously. It’s a bleak picture but the piece seems to end with a contented sigh in a minor chord, reflecting some satisfaction in winter’s own particular delights.