Wolfgang Amadeus Mozart wrote a comic opera, Bastien Und Bastienne, in 1768. He was just 12 at the time and the opera is a very simple work, adapted from a play that was popular in Vienna at the time, “The Loves of Bastien and Bastienne”, which itself was a comic parody of a hit play by Jean Jacques Rousseau.

The opera was commissioned by Dr Anton Mesmer, the Viennese hypnotist of mesmeric fame, who was a friend of Mozart. Full of charm and sensitivity, it was first presented in 1768 in Mesmer’s outdoor theatre. It was next shown in Berlin in 1890, more than 100 years after Mozart’s death. This is the overture.

If that sounded familiar to you, I’m not surprised. Here is the opening movement of Beethoven’s 3rd Symphony, the Eroica. Listen to as much of this as you wish – it lasts for over quarter of an hour. However, you will get the point of this programme after just a few bars.

So, Beethoven’s Eroica bears a striking resemblance to one of Mozart’s earliest works. It’s generally believed that it is unlikely that Beethoven was familiar with Mozart's juvenile works and that the resemblance is purely coincidental. However, in light of what you will hear in the rest of this programme, you might conclude otherwise.

Before we hear more music, I want to consider is a contentious point: did Beethoven and Mozart ever meet?

Here is a brief published article that provides an account of a meeting between the two great men...

From his earliest days as a prodigy in Bonn, Ludwig van Beethoven's great ambition had been to travel to Vienna to meet - and take lessons with - the man he knew was the greatest living composer, Wolfgang Amadeus Mozart. So when did they meet?
In 1787, when Beethoven was 17 years of age he left Bonn on six months' leave of absence from the court orchestra, and arrived in Vienna a month later. Armed with a letter of introduction from Max Franz, whom Mozart knew, he gained entry into Mozart's home and was ushered into the music room to meet his great idol.
Mozart was in no mood to receive him. His health was plaguing him – his untimely death at the age of 35 was less than five years away – and he did not relish having to stop work to listen to a child prodigy from somewhere hundreds of miles away.
"Play something”, he told Beethoven. Beethoven played the opening of Mozart's Piano Concerto No. 24 in C minor. "Not that”, said Mozart. "Anybody can play that. Play something of your own." So Beethoven did.
When the young man had finished, Mozart walked into the adjoining room where his wife Constanze was entertaining friends. "Stanzi, Stanzi," he said, pointing back into the music room, "Watch out for that boy. One day he will give the world something to talk about."
He agreed to take Beethoven on as a pupil, but when Beethoven returned to his lodgings there was an urgent letter from his father telling him to return to Bonn by the next stage – his mother was seriously ill with consumption and doctors feared for her life.
Beethoven had no choice but to leave. Less than two weeks after arriving in Vienna for what promised to be a trip that would change his life, he left for Bonn without ever achieving his ambition of taking lessons with Mozart. By the time he returned to Vienna in November 1792, Mozart was dead.

So, according to that article, the two men did meet. But here’s an article from a website called Mozart.com…

Ludwig van Beethoven was born in 1770; he was 14 years younger than Wolfgang Amadeus Mozart. During Mozart’s time as a child prodigy, the wife of a valet in Koblenz, Mrs Van Beethoven, attended one of the concerts of Wolfgang and Nannerl. She was enthralled and had a dream. 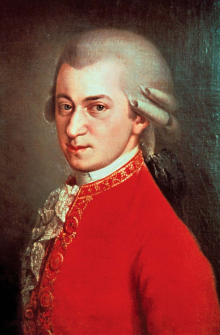 Should she ever have a child herself, it would be great to see it grow up as a child genius. Her dream was to come true. Ludwig van Beethoven, her son, became one of the greatest composers of his time.
Years later, while Mozart was facing a rough time after his return from Prague and was in dire need of money once again, Ludwig van Beethoven came to Vienna in 1787. He was sixteen and wanted to take lessons from Haydn and Mozart. Who knows what might have happened, had Beethoven’s mother not suddenly fallen ill, forcing him to return to Bonn after just two weeks. Mozart, who was working on “Don Giovanni” and was deeply worried for his fatally ill father, did not receive Beethoven, let alone give him lessons. When Beethoven returned to Vienna much later, Mozart was already dead.

According to that piece, then, they never met. And from all I have read the general consensus seems to be that, well, the first story you read is a fanciful yarn with no basis in fact. No contemporary evidence corroborates the story.

All this serves to illustrate that, well, you can believe what you want. Did they or didn’t they? However, it’s clear that Mozart’s work had a profound impact on Beethoven.

Let’s listen to some more music. The next snippet is just about the best-known piece of classical music ever written. Again, listen to as much of this short segment as you like but for the purpose of this programme 45 seconds will suffice.

That was, of course, the Ode to Joy theme in the final movement of Beethoven’s 9th Symphony. Now let’s hear Mozart’s Misericordias Domini, written in 1775, when he was still a teenager. It’s something of a contrapuntal masterpiece that features a repeated motif that first appears after about a minute and which quite clearly contains the seed of Beethoven’s Ode to Joy. So, here’s Misericordias Domini…

There are several more examples of this sort of thing: music by Beethoven that bears a resemblance, suspicious or otherwise, to something Mozart composed. I honestly don’t know if Beethoven deliberately passed off some of Mozart’s ideas as his own; I certainly don’t intend this programme to be based on the theme ‘Beethoven: the plagiarist’, not least because all composers are influenced in varying degrees by the work of others. Besides, I think we can all agree that Beethoven was an innovative genius with no need to copy others’ work.

So I now want to turn to some music by Beethoven that is quite clearly a respectful tribute to Mozart. Beethoven spoke highly of Mozart throughout his life. He wrote cadenzas to two movements of Mozart’s D minor piano concerto, K. 466, and four sets of variations on themes by Mozart. Let’s hear some examples of these variations, beginning with one of the best-known arias from Mozart’s Don Giovanni. This is Cecilia Bartoli and Bryn Terfel singing La ci darem la mano, There we will give each other our hands.

Now let’s hear one of Beethoven’s variations on that theme, for two oboes and cor anglaise.

I will come back to more of these variations later.

As a young man in Bonn, while he was still learning his trade, Beethoven had considerable exposure to Mozart’s music. He played Mozart piano concerti with the court orchestra in Bonn and even played viola in performances of Mozart operas. As someone wrote: “Just as Mozart had once told his father that he was ‘soaked in music’, so Beethoven was soaked in Mozart.”

There’s a defence that could be made to any charge that Beethoven stole ideas from Mozart. In 1790, when Beethoven was 20, he composed a passage of music and, between the staves, wrote: “This entire passage has been stolen from the Mozart Symphony in C.” Then Beethoven had another stab at composing this passage, a little differently, and signed it “Beethoven himself”. In other words, he was determined that no-one should accuse him of plagiarism.

It’s unlikely that we will ever be able to say categorically that the two composers did, or did not, meet. However, it is thought more probable that Beethoven heard Mozart play. A student of Beethoven once remarked that the great man had told him that Mozart had a “fine but choppy way of playing”. If Beethoven did hear Mozart play, it could only have been in 1787, when he visited Vienna.

Three years before that Mozart gave the premiere of his Quintet for Piano and Wind Instruments and asserted at the time that it was the best work he had ever composed. The work was scored for piano, clarinet, oboe, bassoon and horn – instrumentation that was completely new. Fifteen years later, Beethoven used the same combination of instruments for his quintet, which was also premiered in Vienna.

Apart from the key and the unusual combination of instruments, there isn’t really a close resemblance between the two quintets. However, each work has three movements, with the first in sonata form and the third in rondo and both quintets have extended slow introductions. It’s thought that these similarities are unlikely to have been accidental.

There is one key difference, though. Mozart’s quintet is very highly regarded, and Beethoven’s is less so. However, there seems little doubt that Beethoven was inspired to write his piece by Mozart’s quintet.

I have found in trying to detect similarities between certain pieces of music by the two composers that if you look and listen hard enough you will find them.

One of the most popular of Beethoven’s piano pieces is his Piano Sonata No. 8 in C Minor, the Pathétique, written in 1798 when the composer was 27. Let’s hear the adagio from it.

That piece was in C minor, as was the Mozart Piano Sonata, No. 14, K.457, that undoubtedly inspired it. Mozart composed this work in 1784, 15 years before the Beethoven sonata. The adagio has a section with a melody that begins much as the second movement of Beethoven’s sonata does. Let’s hear that movement now.

Now, let’s get back to another of Beethoven’s variations. First, though, you will need to hear Ein mädchen oder weibchen, A girl or a little wife, from Mozart’s Die Zauberflöte, The Magic Flute.

Now here’s Beethoven’s 12 variations on Ein mädchen oder weibchen, for cello and piano. Beethoven wrote these variations in 1798 and they clearly reflect his great admiration for Mozart and in particular The Magic Flute.

Mozart wrote his Symphony No. 40 in 1788. Just seven years later Beethoven wrote his Piano Sonata No. 1 in F minor, Op. 2. The English composer Sir Hubert Parry identified similarities between the finale of Mozart’s symphony with the opening of the Beethoven sonata. Let’s listen to them both. First, the Mozart.

I could continue this story with some other examples but I would feel guilty doing so as I wouldn’t wish in any way to tarnish Beethoven’s reputation. Did he plagiarise Mozart’s work? Maybe he did, a little, but I think it might be best to say that he honoured it. What do you think?